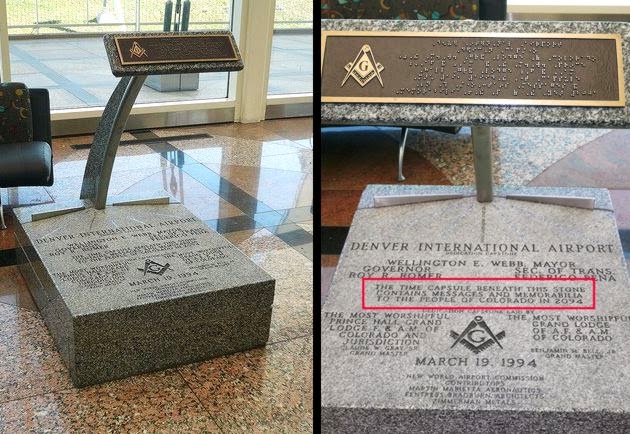 The symbol of Freemasonry makes a fine show on the stone, respecting the Masonic tradition, which wants this symbol engraved on the cornerstone of new and large projects, such as the construction of the capital of the United States and the White House.

From the stone starts a steel arm on which is mounted a plaque that seems written in braile.

The stone is the seal of a time capsule that contains messages for the citizens of Colorado, and which cannot be opened before 2094.

Furthermore, perhaps the most disturbing aspect of all, is the strange plaque placed on the floor of the airport lobby, with a strange symbol containing the abbreviation “AU AG”. 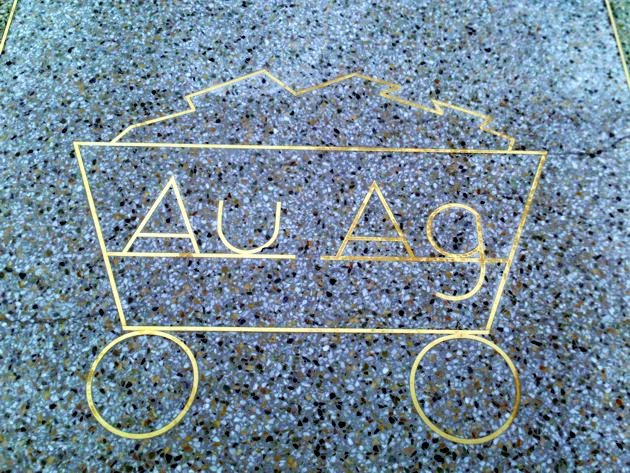 The two syllables can have a double meaning: indicate the chemical symbols of gold and silver or be the abbreviation of the hepatitis B surface antigen also known as Australia HBs AG antigen.

Someone has put forward the hypothesis that the new world order could begin precisely following a disastrous epidemic, which will decimate the world population.

To welcome travelers who are about to cross the gates of the Denver airport, there is a huge statue of a blue horse with fiery eyes, almost 10 meters high. The evident veins that emerge from his body and the demonic eyes that send highly disturbing red flashes, especially at night, are impressive. 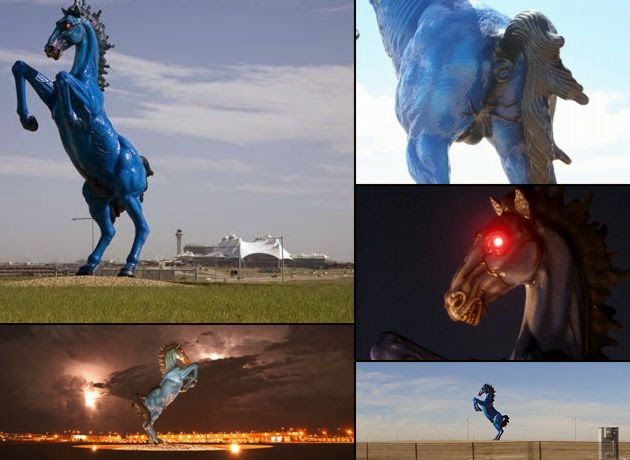 The blue horse looks like the one described in the book of Revelation in the Bible thus described: and “I saw … Here is a green horse, the one who rode it was called death and the underworld followed it, they were given power over a quarter of the earth to exterminate with the sword, with hunger, with the plague, with the fairs of the earth “(Revelation 6,8).

In other words, the horse represents the death that will reach about a quarter of the earth’s population with wars, famines and diseases.

It seems a rather strong symbolism for those who are about to take a plane, especially for families, those who have seen it up close define it terrifying.

The murals that should beautify Denver airport and represent, according to the intention of the author and those who commissioned them, peace, harmony and nature.

There are specific social and political references and other hidden details that seem to suggest the advent of the notorious new world order.

Let’s see the murals in detail. 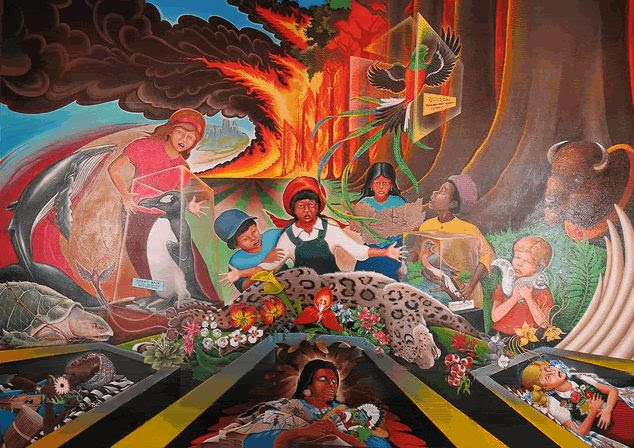 The first entitled “In peace and harmony with nature”, as reported by the official website of the airport, represents a terrible scene: in the center there are sad children for the extinction of animal and plant species, on the left there are whales and dying turtles, in the center a leopard and on the right the head of a buffalo as a trophy; some of the animals are preserved in glass cases almost as if, in the future, it will be possible to observe them only in a museum of past history; in the background you can see a forest in flames and even further back you can see a city surrounded by a green haze symbol of pollution. 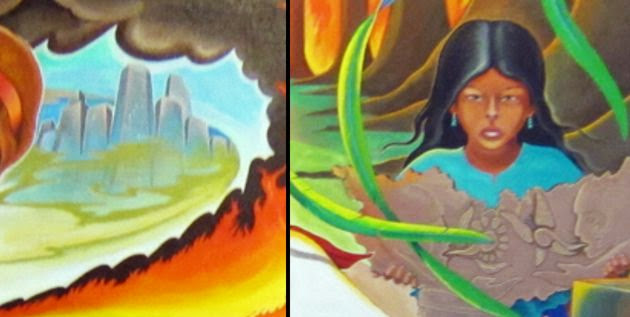 One of the children is holding a Mayan tablet depicting the end of civilization, the painting then shows three deceased people of different ethnic backgrounds: an African woman, a Native American and a European woman. Is the disappearance of these ethnic groups expected? The girl on the right holds a bible in her hand, and she has the six-pointed star of David on her: the symbol used by the Nazis to identify Jews, seems almost to symbolize the disappearance of the Judeo-Christian religion. One of the objectives of Freemasonry has always been to eliminate religions, in particular the Judeo-Christian one. 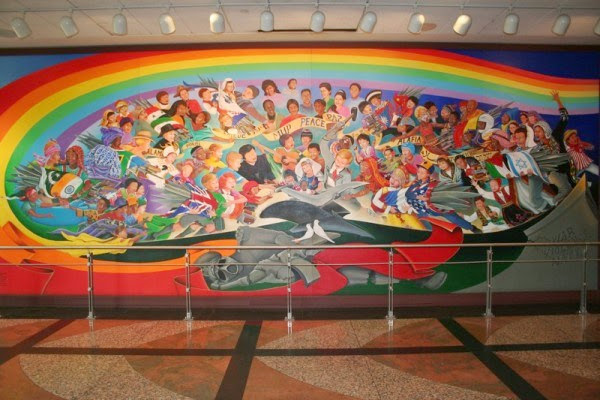 The second mural entitled “Invocation of Peace”. This mural represents all the children of the world, and they desire peace.

In the name of future world peace, the elite is ready for anything. In the murals the children carry their weapons wrapped in the flags of their countries, in the center of the picture, where there is already a disturbing figure of a sleeping soldier, the military power has been dozing since after the Second World War, but is now about to wake up name of world peace and the establishment of the new world order.

The peoples themselves will invoke the use of weapons to solve the problems of the earth. It is interesting to note the rainbow that begins in this mural and ends in the next one. 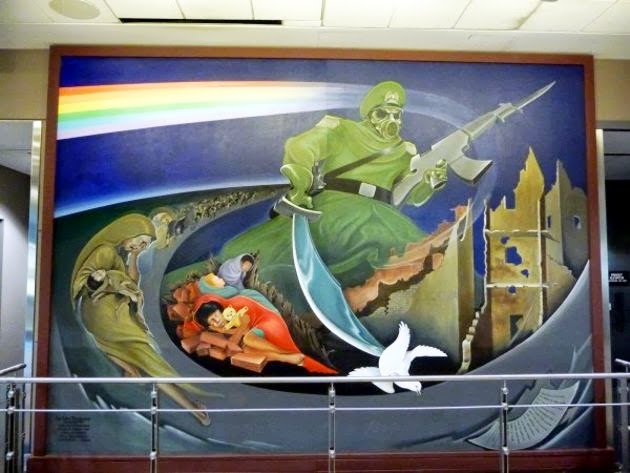 The third mural is titled “Gas masks”: the monster of military power has woken up, the third mural is more disturbing than the previous one: the soldier above the center of the painting looks like a Nazi soldier with a gas mask and in his hands a rifle and a scimitar (symbol used very often in Masonic symbology) with which it seems to strike the dove: symbol of peace par excellence. On the left of the painting there is a long line of parents who cry over the death of their children. In this painting it is not clear where the message of salvation and hope is. The mural is located in front of the main entrance of the largest airport in America. The military figure is large and invincible, located at the center of the action, and has regained the powers he had lost after the Second World War, is once again in full force and is paving the way for the next stage of the new world order. The children who died on the bricks show no signs of violence are simply lifeless, slipped into eternal sleep, through some chemical gas weapon, for this reason the military is protected. At the bottom right there is a letter with the words written by a 14-year-old victim who died on 18 December 1943 in the concentration camp of Auschwitz, as written at the bottom of the letter: all this is definitely disturbing. 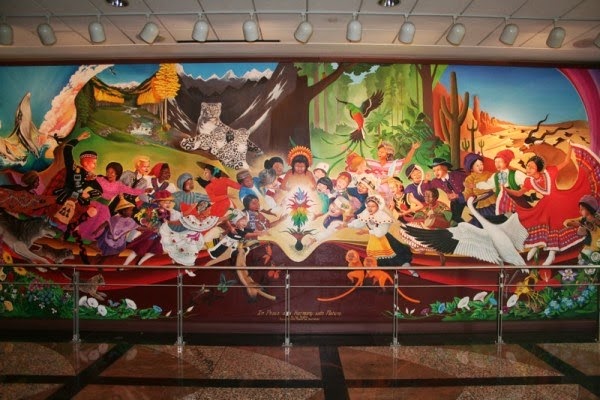 The fourth mural is titled “New peace and harmony with nature”.

The murals describe the new time after the massacre, here is the new humanity that happily celebrates the new world order. Everyone turns to the incandescent plant in the center of the painting in veneration, symbol of the only dominant culture, of the only religion available, and it is the only form of genetically modified food: here we are between genetics and magic.

To summarize what the murals want to represent:

the current situation requires the implementation of serious measures to defeat pollution, extinction, death.
populations ask for the intervention of enlightened governments to make the world more livable
the elite takes control of the situation to solve the problems it has created, but nobody needs to know this: a quarter of the population will be wiped out and the new world order will be established
the plans have succeeded: the harmony of the elite is established in the name of mass uniformism and the advent of the Illuminati era is celebrated 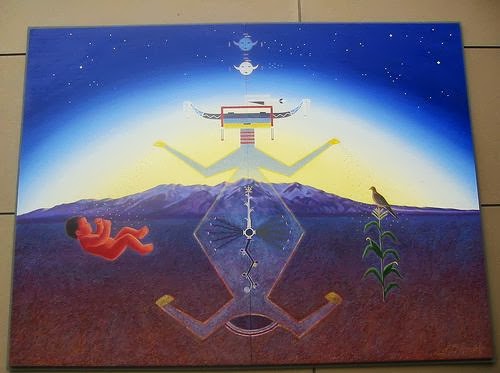 Finally, we find the last mural. This painting is really difficult to interpret has something alien in it…. It seems to indicate the creation of the earth of man and plants under the supervision of an alien race that looks down on … …